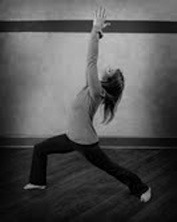 Kelly holds a undergraduate degree in Business Administration from Centenary College and a master's degree in Clinical Social Work from NYU.  She discovered Yoga while living in Austin as a form of exercise but quickly realized how much more it had to offer.  Having practiced since 2003 she decided to deepen her practice by enrolling initially in the 200 hour program at Yoga Loka.  After her completion in 2009 she felt that she had found her path and decided to continue her studies  and completed the 500 hour program in 2010 specializing in Therapeutics.

Kelly has an interest in using the practices of yoga to help people who have been diagnosed with cancer.  Being a survivor herself, she acknowledges how her practice helped her to come back from a very dark place.  She most recently completed the "Yoga of Awareness for Cancer" program at  Duke Integrative Medicine in North Carolina.

When not practicing yoga, she volunteers for Hospice, teaches yoga to people whose lives have been affected by cancer and runs a support group for people who  have been diagnosed with head and neck cancers.  Kelly is a mother of two boys and lives in Hunterdon County.